Official Notice of Nomination and Election 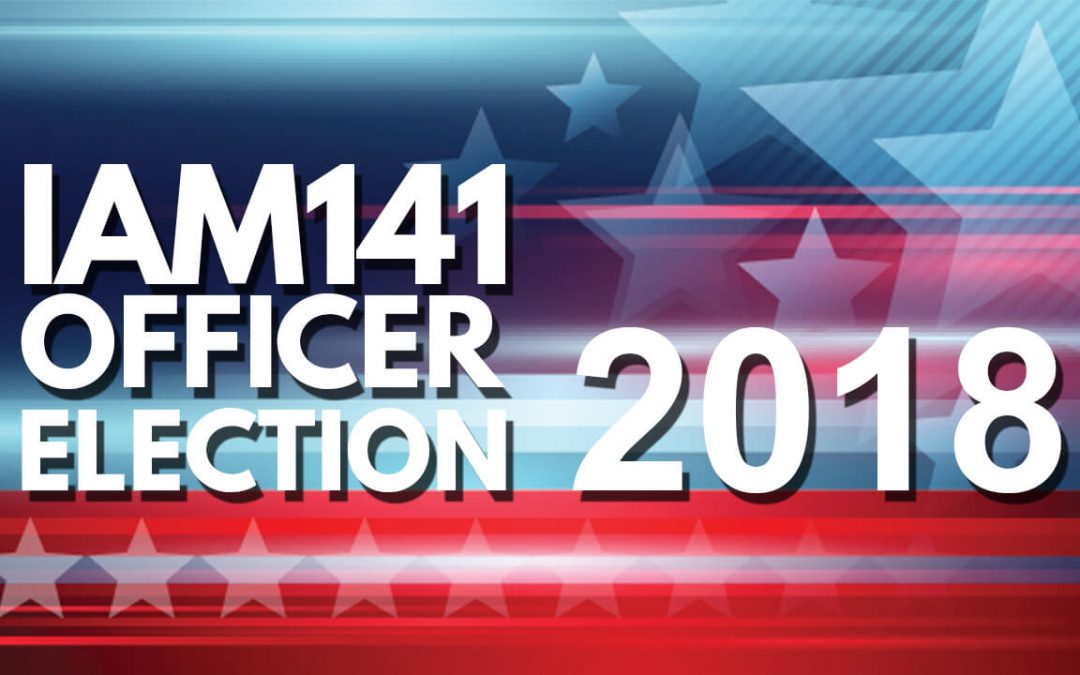 Candidates nominated for PDGC and AGC positions must be members in continuous good standing for at least two years and must be working at the trade one year immediately prior to their nomination and free from any delinquencies of any nature to the Local Lodge, District Lodge or the Grand Lodge (in accordance with the Grand Lodge Constitution).

All other candidates for District Lodge office shall be members in continuous good standing in the IAM District Lodge 141 for at least one year and must be working at the trade for six months immediately prior to their nomination. Additionally, Vice Presidents must be selected from the membership they are to represent and the Vice President – Hawaii must be domiciled in the Hawaiian Islands.

For this supervised election, District Lodge 141 members in good standing may submit written nominations to their respective Local Lodge Recording Secretary, by mail only, to be received no later than January 20, 2018. Hand delivery of a written nomination is not permitted. Members in good standing and meeting the eligibility requirements set forth under the absentee ballot request requirements shall be permitted to nominate by mail. Download the Absentee Nomination Form and see the Officer Election Written Nomination Mailing Addresses.

All nominations, whether mail-in or in-person, should include the following information or the nomination may not be accepted: the nominator’s name, Local Lodge and book number; and the candidate(s)” name, Local Lodge, book number, and the position for which the candidate is being nominated. The nominee and nominator must be in good standing. No nominee may be a candidate for more than one office. Self-nominations are allowed. No seconds are needed for nominations.

Each local lodge shall endorse no more than one candidate for each officer position. In the event that a local lodge has contested nominations, local lodge members in good standing will vote by secret ballot for the nominee(s) to be endorsed by the local lodge. District Lodge 141 will post the nominations results and information regarding the Local Lodges requiring endorsement votes on this website, per past practice. The nomination endorsement vote (if necessary) will be held on February 10, 2018, from 6:00 am- 8:00 am and from 6:00 pm – 8:00 pm. See Officer Election Endorsement Vote Locations.

Qualifying requests for nomination endorsement ballots will be mailed a ballot with instructions, as they are received and verified.

Voted absentee endorsement ballots must be received in the mail by the District Lodge Secretary-Treasurer by 12:00 p.m., February 10, 2018 at the address indicated in the ballot instructions.

Local Lodges will conduct the District Lodge 141 Officer election on June 8, 2018 from 6:00 am – 6:00 pm. See Officer Election Vote Locations. Members in good standing, voting at the Local Lodge polling site, must present a valid photo ID, such as a state driver license, company ID, military ID, passport, etc. In order to have his or her ballot counted, regular dues-paying members must be shown on a Local Lodge voter eligibility list. Any voter who does not appear on a Local Lodge voter eligibility list will be instructed to vote a challenged ballot.

Members seeking to vote by mail will be subject to the same criteria as the absentee ballot eligibility requirements as listed in DL14l Bylaws Article VIII, Section 10. If the records of the District Lodge indicate that the applicant is eligible to vote in the election, the District Lodge Secretary-Treasurer and/or the Election Supervisor shall immediately mail the absentee ballot once ballots have been printed. If the District Secretary-Treasurer determines that the member is not entitled to vote by absentee ballot, the member will be so notified, in writing, as soon as possible but no more than 10 days after receipt of the request for an absentee ballot. All requests denied shall be reviewed by the DOL OLMS Election Supervisor

Members can utilize the Absentee Ballot Request Form or clearly provide the following information in a written request:

The request must indicate which of the absentee ballot eligibility requirements have been met as detailed in the attached requests and in the DL141 Bylaws Article VllI, Section 10.

Absentee ballot requests that are received after 3:00 p.m. June 4, 2018, will not be accepted. Voted absentee ballots must be received at the address listed on the ballot instructions by June 8, 2018 at 3:30 pm Central Time. Due to the breadth of DL 141 members across the United States and certain U.S. territories, members should submit Absentee Ballot Request Forms as soon as possible.

Any member in good standing may protest this DOL-supervised election for valid cause. Such protests should be made directly to DOL Election Supervisor Michelle Forsyth in writing: U.S. Department of Labor – OLMS, 230 S. Dearborn St., Room 774, Chicago, IL 60604; or via e­mail: OLMS-DL-141-ElectlonSupervisor@dol.gov. In order to be acted upon, all protests concerning the conduct of the election must be received by the Election Supervisor, in writing, as soon as possible but not later than the tenth calendar day following the election (i.e. announcement of the final tally results).

If you have any additional questions, please contact your Local Lodge Recording Secretary. Questions can also be directed to District Lodge 141 Secretary-Treasurer Alexander Gerulis at (815) 261-8119 or Ann Clifford at (847) 640-2222, ext. 119.