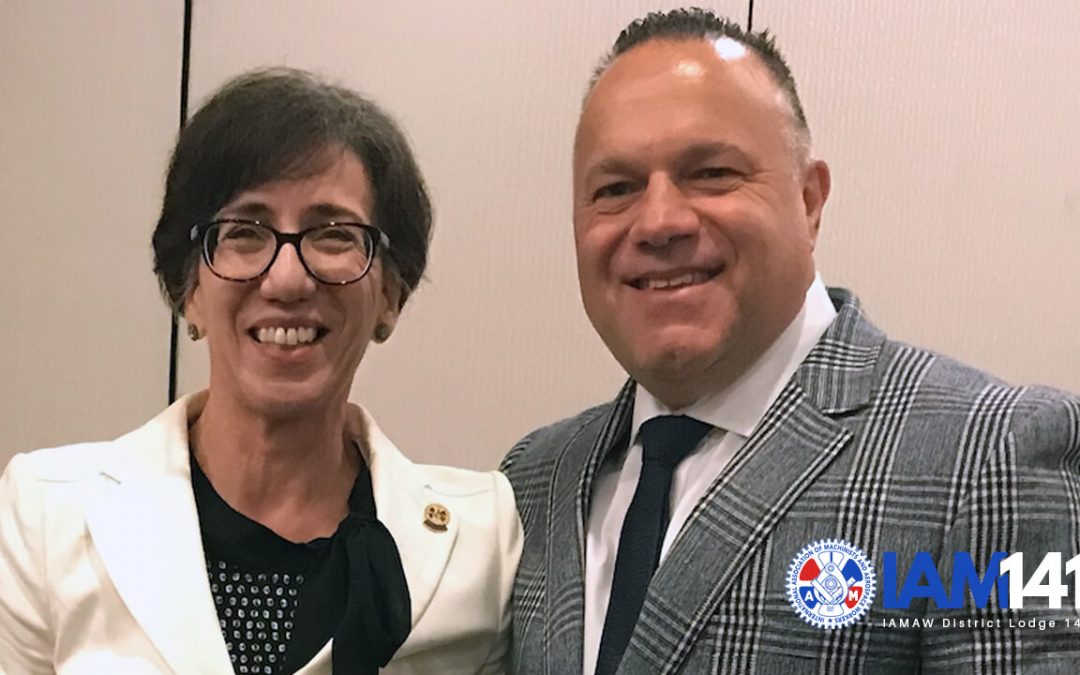 IAM141 Communications Coordinator and MNPL Activist Ines Garcia-Keim has been elected to lead the New Jersey State Council of Machinists, AFL-CIO. As Council President, Garcia-Keim will join Machinists around the nation to promote public policies that support working families. Garcia-Keim was nominated to a full three-year term after serving the remainder of the term of outgoing Council President Vincent Addeo, who was recently appointed as Director of Organizing for the IAMAW.

In addition to being the first IAM141 member to lead the Council, Ines is also the first woman ever to hold the position.

“I’m humbled for the opportunity to help advance the priorities of the 20,000 IAM Members who live and work in New Jersey,” Ines said of her appointment. “Getting involved has never been more important, and we see that reflected at the State Council.”

Previous Council President Vinny Addeo praised the choice of Garcia-Keim, saying “I know better than anybody how much hard work, and all the time and energy that it takes to put this Council together. It didn’t take me long to zero in on who I thought would do the best job of honoring the role that our Council plays in this state on behalf of working people.” Addeo went on to tell the delegates that “There’s no doubt in my mind that Ines Garcia-Keim will take our Council up to the next level, and as we can see from all our guest speakers, she has already done that.”

The New Jersey State Council of Machinists is a gathering of representatives from IAM Local Lodges and Districts throughout the Garden State, who determine legislative priorities and which candidates will earn the support of the Machinists Union. These representatives meet with office holders, candidates, and activists at the annual Council Conference as they vie for the official backing of Machinists Union members. District 141 AGC Gil Simmons and local 914 President Bill Gula also serve on the NJ Council’s Executive Board.

“Control of the House could very well come down to what happens right here in New Jersey,” said Congressional Candidate Andy Kim to the Council. “These races matter, what people like you do matters.” Ultimately our work is about human dignity. That’s something every working person is entitled to.”

Speaking about the vital role that airline workers within the IAM play in helping to shape legislation, Chris Wagoner, Director of the acclaimed Winpisinger Center said, “We have great union density in the airlines. We have a heavy presence in all the major airlines. Moreover, because we have that support, we can get better contracts.”

Ines Garcia-Keim has previously served as the Legislative Chairperson for Local 914, and as Shop Steward, where she participated in contract enforcement for airline workers.

The New Jersey State Council of Machinists was held in Atlantic City from August 13-14.