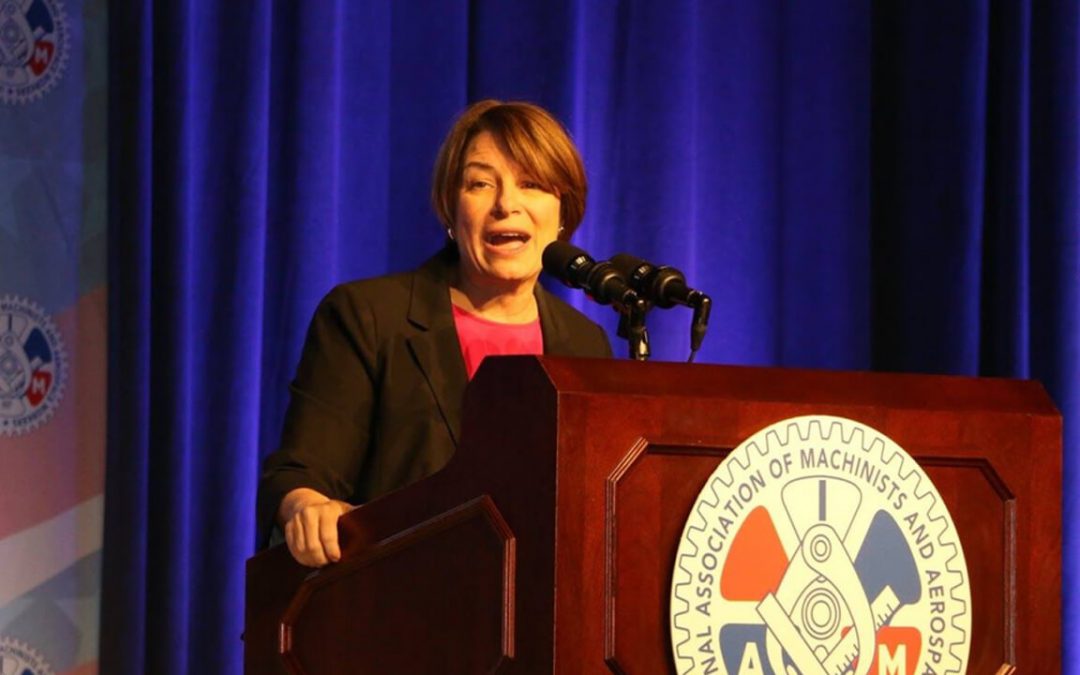 For Senator Klobuchar, the event was the highlight of her first campaign stop in Las Vegas, where she also visited the Blind Center of Nevada and the Harold Brinley Middle School. Senator Bernie Sanders (I-Vt), also addressed delegates at the Machinists Union Transportation Conference. The Machinists Union is the largest union of aerospace and rail workers in the world.

In her speech, Senator Klobuchar emphasized her close ties with unions, which Owen E. Herrnstadt, Chief of Staff for the IAM International President, praised in his introduction of the senior senator from Minnesota.

“Since taking office in 2007, Amy Klobuchar has been a fearless fighter on behalf of working Americans,” Herrnstadt told the assembled group of over 800 union members from the nation’s railroads and airlines. “Amy knows how to get things done.”

“She has supported efforts to protect our pensions, to protect voting rights, to make drug prices affordable, raise the minimum wage … and shine a bright light on corporations that want to merge.” 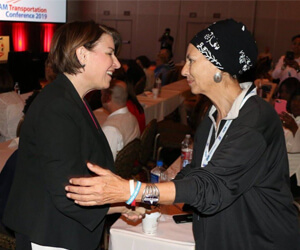 Mergers were a particular area of focus of Klobuchar’s speech to the Machinists, whose members have been rocked by two recent mega-mergers. Notably, the mergers between United Airlines and Continental, and US Airways and American.

But air transport is not the only industry that has endured huge and difficult mergers.

“We are now in a new Gilded Age,” said Klobuchar of the railroad industry. “We’re down to four Class One Carriers that are carrying 90% of the traffic.”

“This means that wages go down because there’s not enough competition,” she said. Unions are the leverage that we have. Unions can take on corporations and win better wages for workers.”

The first female senator from Minnesota spoke highly of the community spirit and activism of Machinists.

“The 600 thousand members of the Machinists Union… helped rebuild communities affected by the raging wildfires in the West and the floods in the Midwest.”

“You sent your Critical Incident Support Team to support survivors when a gunman opened fire in Aurora, Illinois, killing five people, two of whom were IAM Members.”

“And, after the devastation of Maria, you partnered with airlines to fly goods and disaster relief to Puerto Rico,” she said.

After her speech, Senator Klobuchar spent time speaking with delegates and posed for pictures.

The IAM Transportation Conference assembles the top union activists within the railroad and airline industries. The event is being held this week in Las Vegas, Nevada, and will run through April 11.