A Ramp Services Employee at United received $21,993 in back pay after managers refused to accept repeated notes from doctors allowing him to return to work. 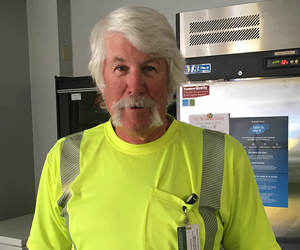 United Supervisors ordered Reno-based Ramp Agent Rich Elliott to get his hearing checked after he didn’t immediately answer his radio. A series of missteps by managers kept him out of work for five months. In October, Rich got a check from United for almost $22,000 in back pay. Rich says that he gets a lot of calls for shop steward work now.

Working with his union, Rich Elliott was able to get back to work, and collected back pay, something that lawyers did not think would be possible in Nevada, a “Right-to-Work” state.

Elliott, a United Airlines employee and IAM Local 1781 Shop Steward, was working a flight in mid-March when he missed a radio call from his supervisor.

The combination of loud jet engines and heavy equipment, and the requirement to always wear hearing protection, makes it difficult to hear well while working on an airport ramp. Missing a radio call is not uncommon. However, in this case, a missed radio call cost United thousands of dollars and sent Rich Elliot home for nearly half a year.

Elliott explained to his supervisor that he did not hear the radio call because his radio was not at top volume and he was wearing earplugs and earmuffs for hearing protection. Rather than accept that explanation, the supervisor met with United Station Managers and, as a group, they demanded that he go to an on-site medical clinic to have his hearing checked.

Elliott had his hearing checked the next day. The clinic found no serious injury or impairment, and authorized him to return to work immediately.

For reasons not entirely clear, United managers in Reno refused to accept the clinic’s recommendation and removed him from his work schedule until more medical tests could be performed. United managers turned in paperwork for workers’ compensation that was filled out incorrectly or was incomplete, delaying the process further.

For the next five months, managers at United refused to allow Elliott to go back to his job on the RNO ramp, despite one doctor after another certifying his return to work. Repeatedly, medical professionals declared that he was fine to return to his job, and each time United management either over-ruled the doctors and demanded more tests or claimed to have lost his paperwork. Elliot spent weeks waiting for someone from the airline to return his phone calls to tell him how he could return to active duty.

As the weeks dragged on, Elliott lost his company-offered health insurance, which made it much more difficult to meet the increasingly elaborate hurdles the company was imposing on him before he could get back to his job. Busy medical specialists scheduled expensive MRIs and other tests for dates that were weeks into the future, long after paychecks stopped coming in. Rich was denied a home loan because he didn’t have a consistent income. When payments began stacking up, he asked about back pay. A lawyer told him that Nevada’s Right to Work laws would make it nearly impossible to win much of anything in court.

Elliott, a longtime union activist with the International Association of Machinists and Aerospace Workers, filed a grievance against United as soon as he missed his first paycheck. His case was picked up by his IAM Committeeman, Yusuf Wyatt, who very quickly advanced it to Olu Ajetomobi, a District 141 Representative.

“This was a very stressful time. I was getting no contact from the company. I never knew where I stood,” Elliot said.

Making matters worse, managers stripped him of the security badges he needed to access the secure areas of the airport where he worked. The badges need to be updated regularly and are automatically deactivated if they are not used. Elliott’s badges had gone unused for so long that they were due to be both updated and deactivated. The badging issue presented another complication that could extend his outage by six more weeks.

“I was so fortunate to have my union behind me,” Elliott said. “Yusaf helped me fill out the legal forms and the union grievances. I was calling Olu just about every day. I would go weeks without any news from Human Resources, but Olu would always call me back, talk me through the process, and he just helped. I really appreciated that.”

Rich Elliott is no pushover when it comes to facing managers. He served as a union Grievance Committeeman for six years, plus a few more as Shop Steward. He has gone toe-to-toe with managers on many occasions, and won many grievances of his own over the years. But, in this case, he followed the maxim “A man who is his own lawyer has a fool for a client.” The company was stonewalling him, and he needed reinforcements. “I can’t thank these people enough,” Elliott said of his co-workers and union reps that stood up for him. “Chris Lusk, our Local Committee Chairman, Yusuf Wyatt our Committeeman, and Olu… it was just too much for one person to try to do alone.”

In early August, the company began taking steps to resolve the situation. “I don’t know what Olu and my Union Reps were saying to them, but the company all of a sudden started being real nice to me. Human Resources was telling me that they would advocate for me, and things like that. I got back to work, but I never thought that I would get paid for all that time I was out,” Elliott said. “Luckily, Olu was working on that, too.”

Olu Ajetomobi, a Machinists Union District 141 Assistant General Chairman, explained that there are good reasons for ramp workers to find a civil solution instead of rushing into a courtroom.

“In a case like this, we work with trial attorneys and legal experts, but Nevada law is not always worker friendly. We weren’t finding legal guidance telling us we were going to be able to get back pay in a reasonable amount of time, if we were ever able to get any back pay at all,” Olu said. “Fortunately, the Human Resources Department at United agreed to grant us back pay without going to court. I think that can be considered a win for everyone involved.”

On October 17, two months after he returned to work, Elliott got a check for almost $22,000 in back pay. “I had written it off,” Elliot says. “Nevada is a Right to Work state, and even my lawyer was telling me I had no chance in court. This was a decision that had been made after going through the union grievance process. I probably never would have been paid for that five months if I had gone after it in court. As a union, we won!”