Outsourcing is one of the leading causes of unemployment in America and a major driver of wage stagnation. But now, union members at Alaska Airlines have just voted to approve a deal that will end the practice for some 5,000 workers at the carrier.

In 2005, while Alaska Airlines was in the midst of a frenzied effort to boost shareholder returns, executives made one of the most ill-advised moves in the carrier’s history. They decided to outsource hundreds of unionized baggage handlers at Sea-Tac  Airport in Seattle, Washington.

Investors hailed the decision, thinking it would generate higher profits. It didn’t.

The company that Alaska entrusted to handle ramp work, Menzies, was notoriously plagued with incompetent management and high turnover rates. To save money, the company cut corners on training and barely bothered to provide safety equipment to employees.

Within months, poorly staffed and under trained contract workers had ripped a foot-long hole in the fuselage of an Alaska Airlines jet with a belt loader. The accident was not reported, and the MD-80 aircraft carrying 140 passengers was forced to make an emergency landing en route to Burbank, California.

Another contracted employee fell asleep in a baggage compartment and woke up after that plane had taken off, triggering additional bad press for the airline. Then last August, a contracted employee at Horizon Air, an Alaskan subsidiary, took a Bombardier Q400 for a joyride over Puget Sound, performing stunts and barrel rolls before he ran out of fuel and crashed the aircraft near Sea-Tac. Fortunately, no one was injured on the ground in that incident.

Outsourcing had proved to be a bad investment. 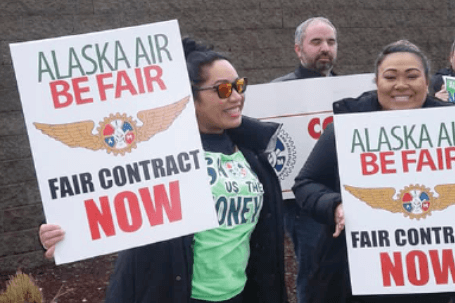 Alaska Airlines workers responded by organizing the Menzies contractors into their union, and by lobbying for a $15/hour minimum wage at Sea-Tac. They calculated that these moves would completely eliminate any chance of a financial reward for the company because of outsourcing.

For about 900 employees at Menzies, the news came as a shock. However, McGee representatives made it clear to the Menzies employees that they would not be fired or summarily laid-off. They would all be given the opportunity to become unionized workers at McGee. With unionization, they would also all get guaranteed flight benefits, better health insurance, and union-negotiated bonuses.

The president of McGee, Dean DuVall met with the former Menzies employees and welcomed them into their new company. “They were quiet at first, in shock, and processing. Then, as the meeting broke up, they were engaged and eager to talk to us.” DuVall told the Seattle Times.

To its credit, the airline seems to have learned some valuable lessons from its disastrous decision to play around with outsourcing. The tentative deal struck with union negotiators this month will prohibit the outsourcing of union work at Alaska Airlines.

The Machinists Union has virtually eliminated outsourcing for the 40k+ members of the union in the airline industry. Ramp workers took United Airlines before Federal Arbitrators over a scheme to outsource 22 control tower positions. In that case, the union made it all but impossible for the carrier to outsource any union job at United ever again.

At American Airlines, the Machinists Union allied with the TWU to prevent the outsourcing of work to overseas vendors. That fight became so heated that the airline has seen it’s stock market performance sag over the issue.

Besides ending outsourcing for covered members, the Alaska agreement will increase base wages by a historic 14%, on average, starting the same day that it is signed. It will also provide a mechanism to ensure that wages always keep pace with the rest of the industry, reduce health insurance costs, increase company-sponsored retirement benefits, and increase premium and shift differentials by up to 20 percent, among other improvements. 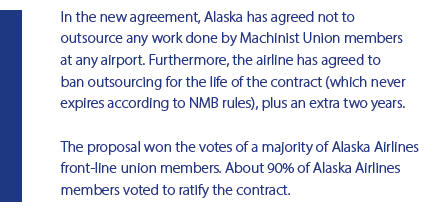 “I thank IAM Members at Alaska Airlines for the unity and solidarity they demonstrated throughout this process,” said IAM General Vice President Sito Pantoja. “It’s because of that unity that the negotiating committee was able to achieve the notable gains in these agreements.”

“I congratulate the IAM Negotiating Committee on a job well done, said IAM District 142 President and Directing General Chairman Dave Supplee. “IAM members at Alaska Airlines can be proud of these agreements, especially the prohibition on outsourcing work. IAM Members spoke loud and clear that their futures needed to be secure, and this agreement is a solid step in the right direction.”

While historic for Alaska Airlines, the new agreement could have even bigger ramifications for other airlines.

“Alaska Airlines is an almost perfect twin to JetBlue,” said Victor Hernandez, an Assistant General Chair at the Machinists Union. “JetBlue Ground Ops Crewmembers are getting involved and working to join the IAM,” he said. “They’re talking to our organizers about the Alaska contract right now, and they like what they see.”